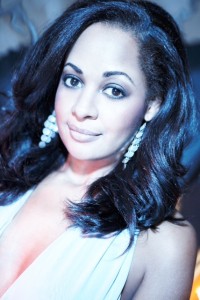 Vocalist La Tanya Hall is poised to take her place as one of the foremost jazz vocalists in the world today. Her ability to reinvent the Great American Songbook is amassing glorious reviews from around the globe. It’s About Time (Bridge Records 2008), Hall’s debut recording, has been heralded as “an impressive debut from one of jazz’s brightest stars,” [Popjournalism.com/February 2009].  Jazz.com describes her as “a woman ripe with talent [whose] interpretative skills are a marvel.”
Her versatility in a variety of musical genres has allowed her to collaborate with some of music’s most celebrated artists, including Diana Ross, Bobby McFerrin, Harry Belafonte, Michael McDonald, Burt Bacharach, Quincy Jones, Aretha Franklin, Rob Thomas, and Patti Labelle. And she has appeared as a soloist in her own right with the American Composer’s Orchestra, the Colorado Symphony and the St. Louis Symphony.
She has and continues to appear with an equally diverse range of musical icons: the boundary-less vocal avatar Bobby McFerrin; the master of the Great American Songbook, Michael Feinstein; the crooner and producer Steve Tyrell; pop star Rob Thomas; and toured this past summer with the legendary Steely Dan.
Her work with Bobby McFerrin is very special to her.  She appears on Bobby’s new recording, SpiritYouAll [Universal Music 2013], and is prominently featured on his 2010 masterpiece recording “Vocabularies” [Universal Music]. Since 2002, she has been a member of and toured the world with McFerrin’s 12-voice ensemble, “Voicestra.”
“That’s some of the most creative and fulfilling work that I’ve ever done,” she says, “Everything is totally improvised – we don’t use written or pre-set music of any kind.  Sometimes we have gotten to places so deep musically that I’m actually in tears on the stage.”
When ASCAP recently mounted an All-Star Tribute to Quincy Jones, she was on stage for virtually the entire evening, singing with nearly every big name pop and soul star who was ever produced by that legendary impresario.
In the beginning stages of her career, Hall toured with Harry Belafonte for five years almost continually; this was the last period when the great star was still touring heavily, doing an average of 150 shows a year.  She filled the same role in his group that the acclaimed jazz vocalist Dianne Reeves had occupied a decade or so earlier, and was a featured duet partner with Belafonte on the song “Skin To Skin,” both on the recording and PBS special, “An Evening with Harry Belafonte and Friends.”
When Belafonte began phasing out his touring operation, Hall accepted two engagements that furthered her standing in industry: she headlined in the final road company production of the smash hit musical show Dreamgirls  and also toured with the legendary diva Diana Ross. After working with Ross, LaTanya also did several gigs with the no-less legendary Aretha Franklin.
Raised in Texas and Colorado, Hall first began singing professionally at age 13 with her father, a jazz pianist who performed all over the world.  “Mastering the standards was invaluable training for me,” she says.  “I learned from my father to create my own style and not be afraid to take chances vocally.” That influence can be heard throughout her music.
Hall’s voice has been described as “powerfully sensuous,” “a show stealer” and “beautifully musical” in a number of reviews from around the world.  And her stage presence has been touted as “brilliant” and “extremely engaging.” It’s easy to get caught up in vocal extravagances when you’ve got a voice like La Tanya Hall, but she tastefully refrains. She lets fly when the time comes, but isn’t afraid to hold a note.
Hall continues to be an in-demand session singer and an accomplished actress, having lent her skills to numerous recording projects, Broadway shows and television and movie appearances. She was most recently seen in the dramatic role of Sabine Winston on the critically acclaimed CBS show, “Blue Bloods.”

This function has been disabled for La Tanya Hall.